The Stockings Were Hung By the Chimney With Care 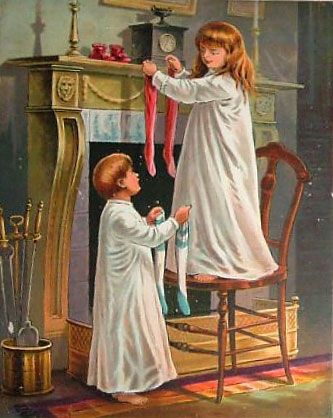 Hanging stockings by the fireplace for Santa to fill is a common tradition.  Although no one knows for sure, it is believed that it began in Scandinavia.

There is a Norse tale of a poor old man who had three daughters.  He loved his daughters very much.  They were kind and helpful and he wanted nothing more than to see them happily married and raising families of their own.  However, he was too poor to afford to give a dowry for his daughters.  A dowry is a gift of money that a bride’s family gives to her husband.  The young couple uses this money to establish a home and a life together.  Without a dowry, it was unlikely that the three daughters would ever marry.  The poor father worried that there would be no one to care for his daughters after he passed away.

One Christmas Eve night, Saint Nicholas was passing through the town where the man and his three daughters lived.  He heard of their predicament from the villagers.  He wanted to help in some way, but felt that it may offend the man if he offered to give him money.  The three daughters had hung their stockings by the warm fireplace after washing them so they would be clean dry to wear on Christmas morning.  Saint Nicholas saw the stockings and formulated a plan: he would sneak in without waking anyone in the house and fill each girl’s stocking with gold coins.

On Christmas morning, the girls were delighted as they found their stockings had been filled with money and they would now be able to marry and start homes of their own.  They all had a very Merry Christmas, and children began to hang their stockings by the fireplace every Christmas Eve night, with the hope that Saint Nicholas would stop by in the night and fill them with gifts. 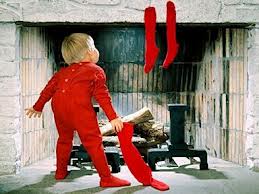 Read More About The Stockings Were Hung By the Chimney With Care...