Is My Foot Bruised or Broken?

You’ve just felt a terrible pain in your foot—you’ve dropped a weight on your toe, you’ve smashed your foot into the door. We’ve even seen people who’ve dropped beds on their big toes! The type of injury doesn’t matter; it’s what comes next that counts. Once you stop wincing, you want to know just how bad things are—is the foot broken or have you escaped with just a bruise? 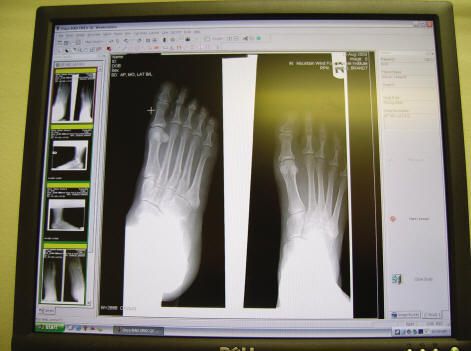 What to Do After a Foot Injury
To begin with, it’s important to understand that you should never take chances with your foot health. While the rest of this blog will help you determine if your foot is just bruised, we want to emphasize the fact that, if there’s even a chance you’ve broken your foot, you need to see your podiatrist. The only true way to detect a foot fracture is with Xrays, something we can provide in our American Fork podiatry practice.

If, however, you need some help clearing things up in your own mind before making the call to our office, here are some of the signs that will help you distinguish between a broken foot and one that’s just badly bruised.

Signs to Ignore After a Foot Injury
First of all, keep in mind that, even if you can walk on your foot and wiggle your toes after a bad foot injury, you are still very likely to have a broken bone. Depending on the location of the fracture, many people are able to walk and move their feet, even if they’ve broken a bone.

So, now that you know what may be possible, even with a fracture, here are some of the symptoms of a broken foot.

Signs You’ve Broken a Foot Or Ankle Bone
If you are experiencing any of these symptoms, it’s very likely that your injury has resulted in a broken bone:

If, however, you’ve only bruised your foot, you still may see some seemingly frightening symptoms on your feet.

What a Badly Bruised Foot Feels Like
A badly-bruised foot (also known as a muscular contusion) can often show symptoms that mimic those of a foot fracture. Symptoms can include:

Even if your foot isn’t broken, some symptoms of a muscular contusion may require your podiatrist’s attention. If, for example, you are an athlete and want to return to your training, it’s important to make sure that a deep muscle bruise if fully healed before you get back in the game. Playing sports with a muscle contusion can lead to the build-up of scar tissue at the sight of the original injury.

In extreme conditions, an unhealed bruise in your foot can lead to fluid buildup in the muscle. This buildup can, in turn, affect your blood flow, causing a rare but serious complication known as compartment syndrome.

Finally, if you rush your recovery from a bruised foot or ankle, the regrowth of your injured cells may be compromised. Known as myositis ossificans, if this condition develops, your muscle cells will grow back as bone cells instead, leading to many further complications.

Now that you have a basic guideline to determine if your sore foot is bruised or broken, there’s one more fact you need to know. Even if you’re certain your foot is not broken, it’s important to see your podiatrist if your foot pain lasts longer than a few days after an injury. Walking on an untreated fracture, or rushing a recovery from a bruised muscle, could make the injury worse, perhaps even resulting in otherwise avoidable surgery. Don’t be afraid to see Dr. Brandt for a painful injury that isn’t  a fracture—we’d rather see you in our Utah podiatry office now for a badly bruised foot than see you in a few months, only to tell you that your fracture was compounded by leaving it untreated for too long.